‘Made in Britain’ is a stamp that can be found on many products, from the trendiest fashion brands to adored chocolates, quality vehicles and more. Here in Great Britain this can often be used as a good selling point, proving products are locally made and that buyers will be supporting their local economy. But how does it fare internationally?
Through conducting a mixture of surveys, looking at search trends, and in-depth analysis of secondary research, we explored the international perceptions of products made in Britain, the most popular brands, changing trends, and what products Brits abroad miss most.

All these fascinating findings are detailed below.

When international communities think of the most recognisable British products, four of the five top ones come from Scotland. Aside from tea (obviously), the other four were: whisky, tartan, kilts and haggis.

Funnily enough, this doesn’t reflect the actual main exports from Britain, with haggis way behind the likes of machinery, vehicles, pharmaceuticals and much more.

Our survey also found that Burberry, Cadbury’s and Rolls Royce were considered the three most ‘British’ brands.

British Brands’ Popularity Around the World

In analysing the most searched for British brands across the UK and a few international markets, fashion dominated the top results. Interestingly Burberry was down in ninth position for UK searches despite being one of the most associated British brands, though in other countries such as the USA, China and France it made the top five.

ASOS was top in five of the six countries outside of the UK , only topped by Burberry and Britain’s biggest fashion retailer Next in China. Only eight brands make up the top five searches in the six countries studied, with PrettyLittleThing creeping into the USA and Australian top searches (no doubt thanks to the Kardashian clan’s influence).

PrettyLittleThing have also benefited from the rise of fast fashion, an industry that relies on quick and strong delivery processes to keep their customers happy.

We also looked at eight of the most searched for British brands to see in which countries they were most popular: 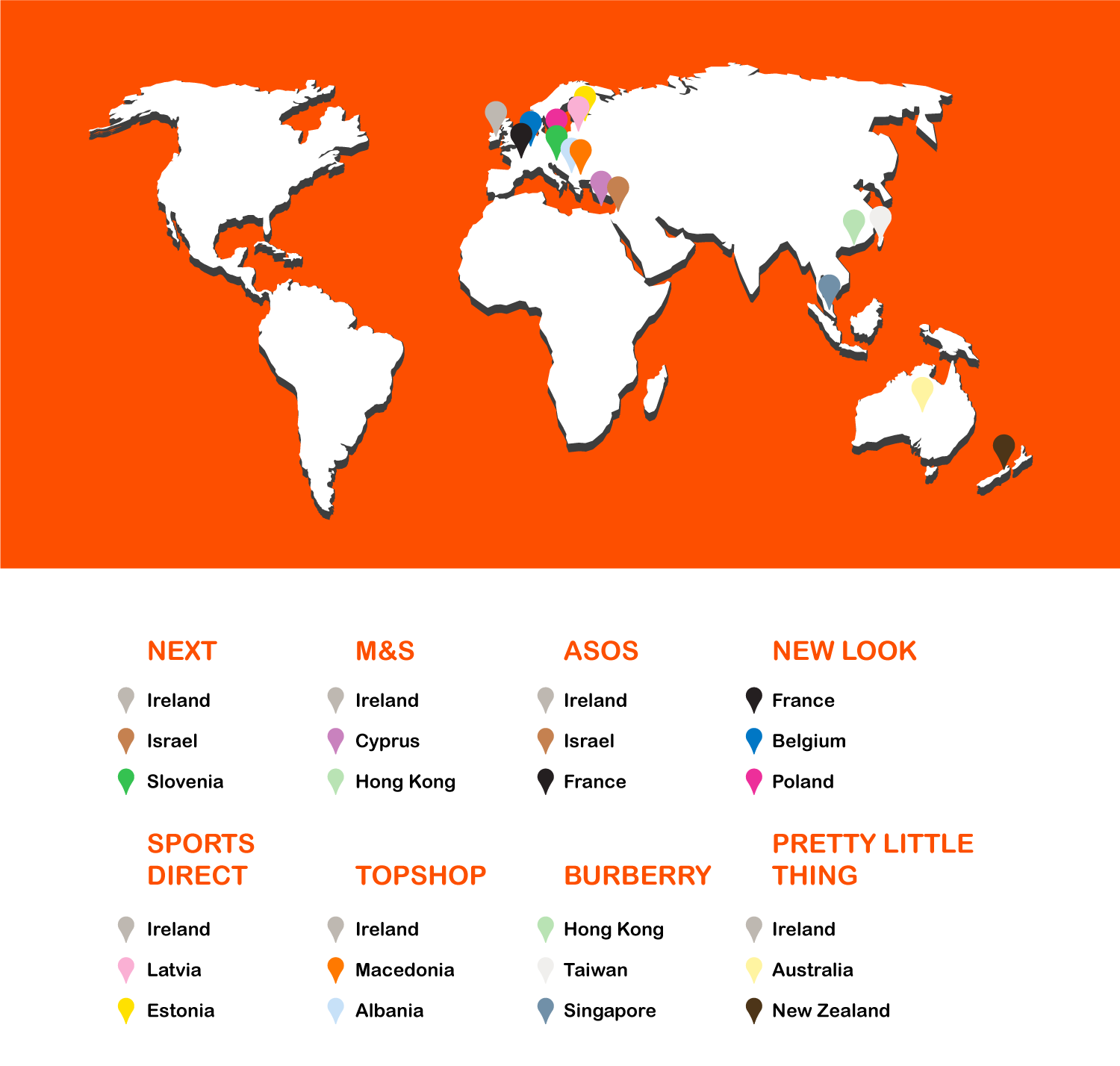 Unsurprisingly, Ireland and France popped up a lot, but who knew Topshop was so popular in Macedonia? Or Burberry had such a Taiwanese following?

As fashion seemed to be one of the main products and cover most of the top brands associated with Britain, we looked at search trends around the most popular fashion weeks.  We found that London Fashion Week has had about 5% more searches than Paris and double that of Milan Fashion Week over the past 15 years.

Even our very own Queen was spotted at London Fashion Week this month, wearing tweed – an internationally recognisable British fabric. Worldwide interest in tweed has risen by 63% over the past ten years, driven more recently by the popularity of TV show Peaky Blinders.

As we’ve shown before, celebrities and popular culture can have a big influence on consumer buying and the same is true for British clothing products.

Surprisingly, the Netherlands and USA were the countries who specifically searched for ‘peaky blinders clothing’ the most, showing an international impact.

Using more primary research and case studies, we found that two-thirds of Brits are happy to spend extra to have their favourite products shipped from home, rather than buying a local alternative.

On average, they’d spend 10% more for such home comforts, with men the more desperate for their homegrown products and willing to spend on average 20% more to get them shipped over than women.

As Brits abroad grow older they seem to adapt more though, as under 35s are willing to spend double the amount of retirees to get their home comforts shipped over. Still, in total one in three Brits living abroad regularly have their loved ones send over home comforts.

‘Made in Britain’ looks to be a badge that really does influence consumers from the UK and the wider world to make a purchase. This can be encouraging for many British businesses looking to expand overseas, knowing that there are plenty of great opportunities out there (and that sticking such a label on their brand and products can help in certain markets).

Think you are a British brand expert? Take our quiz and test your knowledge.