Here at Whistl, we surveyed 2,000 members of the British public to find out who’s spending their money on overseas purchases. The results are in and it’s time to head to the checkout to find out where we’re shopping and why.

As mobile connectivity becomes increasingly accessible and it gets easier to select what you want at the touch of a button, online shopping is now more popular than ever. Us Brits are making the most of this technology, with over a third (34%) regularly buying products from other countries and 15% of us buying from abroad on a weekly basis.

Who is doing all this overseas shopping? We found that men are most likely to buy from a retailer abroad. A huge 79% of the men we asked said they’d purchased something from a different country in the last year, compared with 66% of women, and over a third buy products from abroad at least once a month.

As well as men being more likely to shop abroad, we also found that we’re at our most adventurous shopping-wise in Belfast. Over half of those in Northern Ireland’s capital said they’re happy to buy products from out of the country at least once a month. In Liverpool it’s a very different story though. Scousers are a warier bunch, with over a quarter of shoppers saying they’ve never bought anything from overseas online.

As well as location, when looking at who’s buying outside of the UK, the age of shoppers also offered up some interesting findings. Over half of 25 to 34-year-olds are shopping with overseas retailers once a month, and one in 10 are doing this daily. This makes sense, as millennials are increasingly tech-savvy when it comes to buying online.

An impressive 43% of Brits are regularly shopping with Chinese retailers. This can be seen in our top five international sites that have become go-to names for consumers in the UK. China’s AliExpress and dealextreme top the list, followed by borderfree, Macy’s and Newegg in the States.

The reasons for buying from these sites and others outside of the UK are varied. One of the most popular reasons is wanting to pick up on international fashion trends, with almost a third of Brits getting their fashion fix from other countries.

Another poplar motive for looking at availability in other countries is securing products before their UK release date. When asked, we found that men are more than twice as likely to shop with an overseas retailer to get their hands on the latest games and music.

When buying online, over half of Brits (55%) said that price is the most important factor, followed by 20% saying that low-cost or free delivery is one of the main things they look out for. So, wherever in the world you’re based, if you’re selling at competitive prices and offering excellent delivery options, you’re going to prove popular with British shoppers. 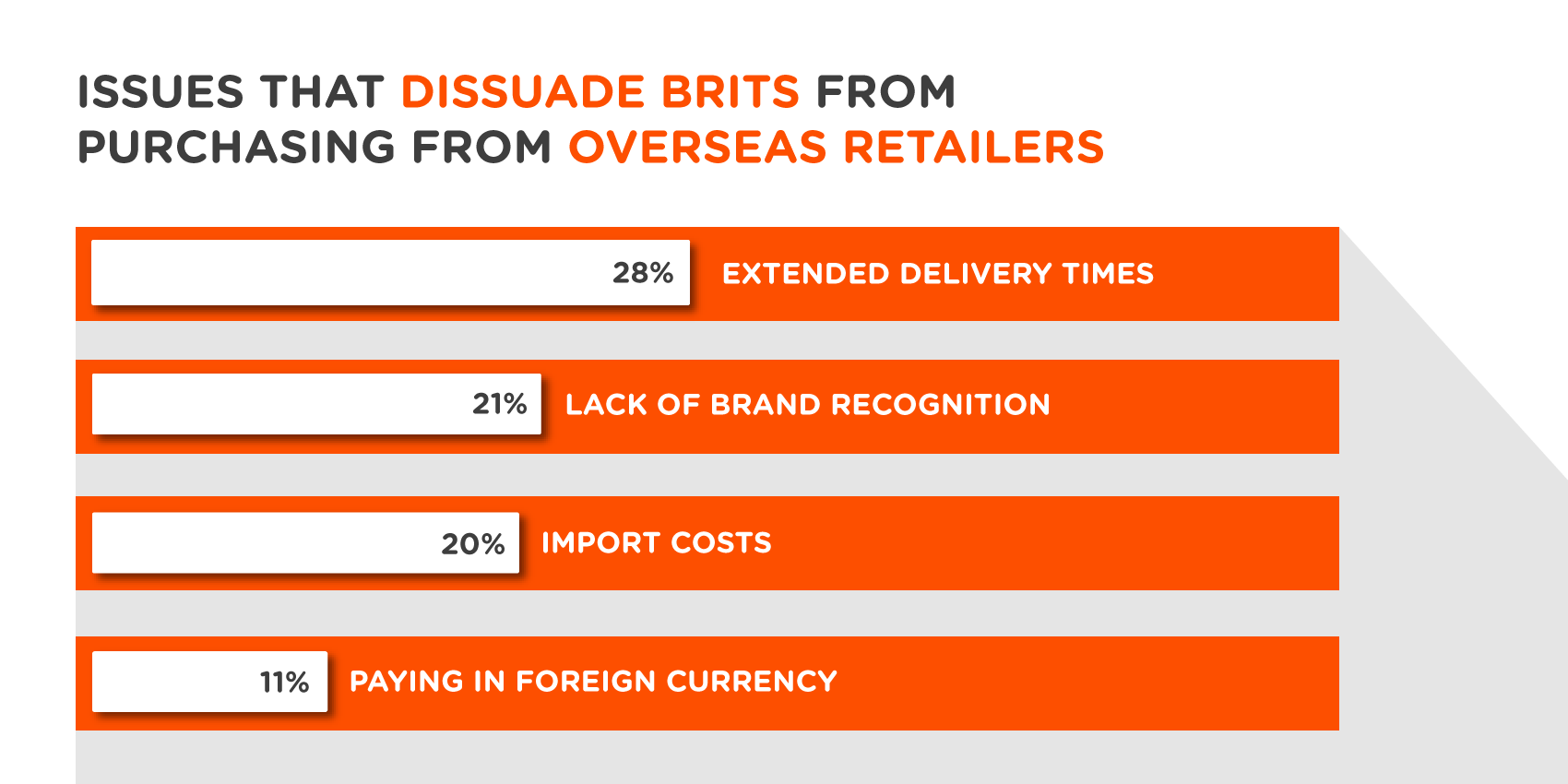 While many of us are happy to buy online from stores around the world, some buyers are still a little hesitant to take the plunge and part with their cash. Wary buyers say lack of brand recognition (21%) is a major reason to pause before hitting the purchase button. Import costs, paying in a foreign currency, and extended delivery times also featured in the main points that are putting off potential buyers.

In fact, extended delivery times is the main issue for women, with just under a third (31%) dissuaded from buying from retailers based overseas because of this. Meanwhile, in Sheffield, half of those asked said that not knowing enough about the retailer’s reputation was the main factor putting them off doing their online shopping with overseas stores.

How do you find shopping online? Would you be happy to buy from a brand in America? Do you regularly shop in China?

FulfilmentRetail
ASOS to clamp down on ‘serial returners'