Inspired by Japan, Yushoi uses the natural goodness of vegetables and blends them with exciting, innovative flavours to deliver you a range of great tasting baked snacks that are better for you. Yushoi snacks are 50% less fat*, high in fibre, a good source of protein and they’re full of flavour, making them perfect as part of your balanced diet.

Research showed that taste testing led to a higher level of purchase propensity.

With the opportunity to place product in hands with consumers, the objective of building brand awareness and encouraging taste appraisal of Yushoi Snapea was achievable.

A core target audience of health conscious families were targeted in key regions.

The campaign landed across January and February, to mirror the healthy new year new start mantra. 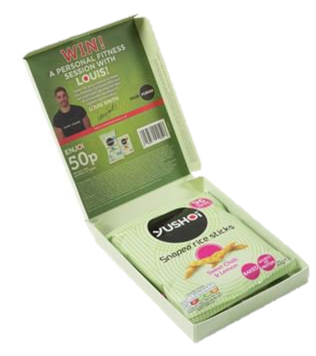 The highly targeted campaign ensured engaged consumers were exposed to Yushoi to build brand awareness and allow immediate trial in the comfort of home.

Generated significant sales increases at target stores.  On average unit sales during the 4 week campaign were +20% higher than the control stores.

Halo effect across the Yushoi range, plus significant quantities of coupons redeemed.

We worked with Yushoi and our doordop media partner Whistl to devise a highly targeted shopper campaign that maximised impact and appeal.

AdvertisingRetail Doordrop campaign for Who Gives a Crap wins bronze

Case Study Who Gives a Crap

We help you find the right solutions, for your business needs.