“I’m just going to put you on hold” is a phrase to inspire dread in even the happiest consumer. You could be waiting hours, listening to insipid classical music or aggressive ‘Dad rock’ or even worse, cut off. According to our survey of 1,000 Brits, being put on hold is one of the most exasperating life experiences.

Brits have a reputation as queue lovers, happily standing in line chatting about the weather, tutting at queue-jumpers and complainers. But the reality is quite different. Most Brits would wait just TWO minutes before hanging up with Millennials the least patient of all with companies having just 60 seconds to resolve their problems on the phone before they hang up. Women are three times as patient as men, with 10% willing to wait on hold for 15 minutes, while men would hang up after just five minutes. And if we hang up, we’re not likely to call back. 34% of people admitted that if they put the phone down in frustration, they would never ring back.

More than half of participants said they’ve lost their temper with a customer service call centre, with people left “crying with frustration”, “angry” or with their “blood pressure going through the roof”.

“I was on the phone to the Amazon customer service centre following some fraudulent transactions on my account,” says one consumer. “I couldn’t get the message over that the items that had been purchased on my account were not me and that my account had been hacked. I spent more than half an hour on the phone before I eventually had to give up. I calmed down and phoned back the next day and it was sorted in five minutes. I couldn’t believe how badly the first person handled the situation.”
When it comes to receiving poor customer service, a quarter of people said they would never shop with a company again if they experienced poor customer service and 37% would go to the trouble of making an official complaint.

Hanging on the Telephone

Call centres are the most popular method of customer service for the over 65s while 18-24-year-olds prefer email to social media. Traditional mail has fallen out of favour with just 10% preferring this method.
Live chat is a good option if you’re looking to convert consumers with 36% saying that being able to ask questions mid purchase made them more likely to buy. It’s also an efficient method of delivering customer service. Consumers can multitask while they’re chatting and chat operators can manage several chats at a time.

70% of us would put the phone down if we were kept on hold with silence or beeps. Hold music preferences varied across the country with half of Belfast residents favouring classical music, and a third of Scots preferring rock music. “Certain music can negatively impact on consumers such as dull, repetitive, looped or overly familiar music,” says Rachel Hard, a registered psychologist. “It brings us back to the present and reminds us that we’re on hold.”

International call centres were the worst offenders for not understanding consumers, sticking rigidly to scripts, and lack of local, geographical knowledge and were one of the reasons that a whopping 90% of consumers think customer service centres are ineffective at dealing with issues. 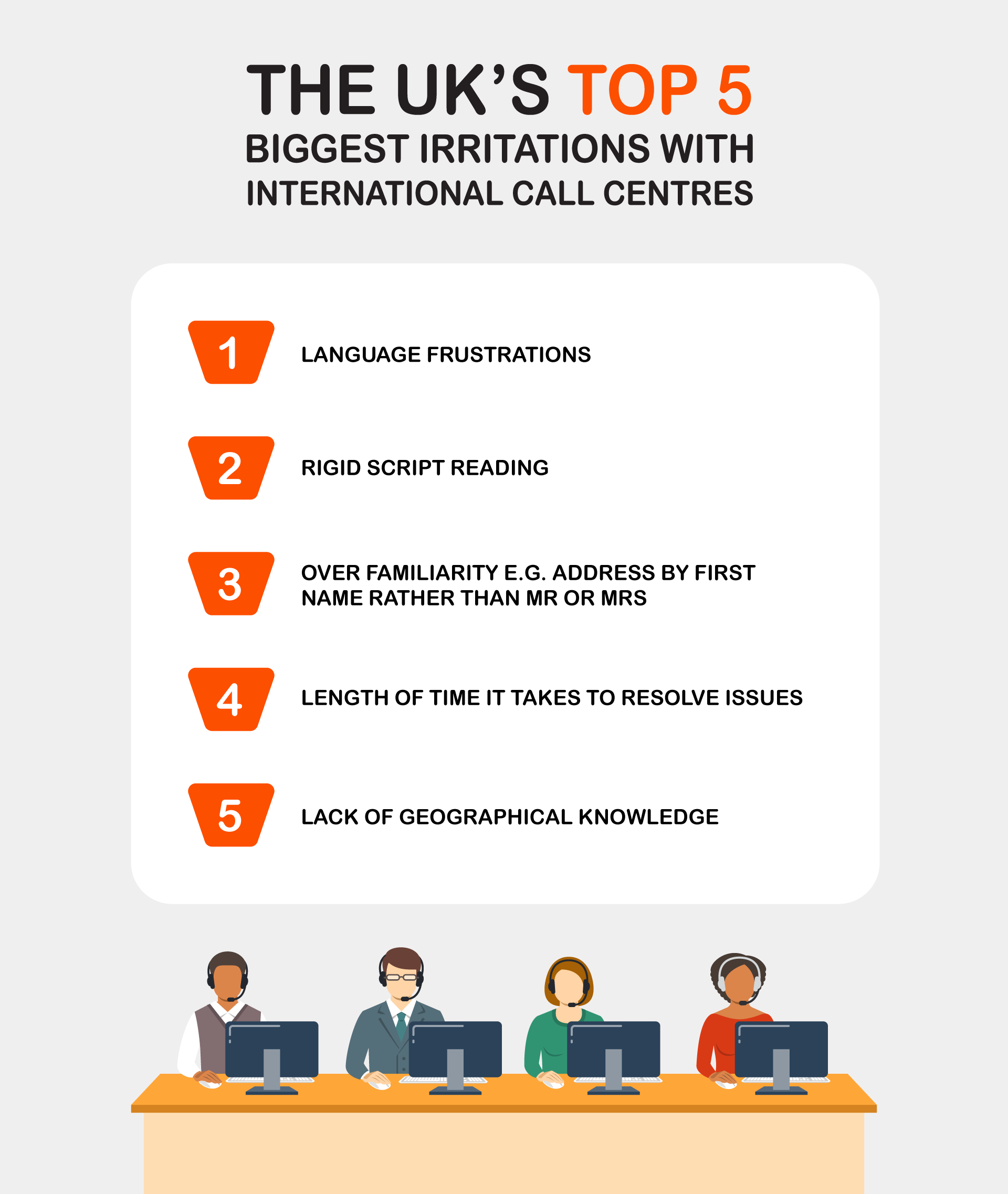 Contact Services
How to improve your call handling service

Contact Services
What is customer service ticketing, and should you outsource it?